The largest deal globally was by the Japanese pharmaceutical company Takeda, which acquired Shire (Ireland HQ) for $77bn. An interesting feature of this transaction is that it was part in shares/ADS (American Depositary Shares) and part in cash, which is unusual for a Japanese company.

Japan M&A was at an all-time high in 2018 and cross-border transactions have been steadily climbing over the last decade from 40% to over 80% of the value.

The UK has consistently remained the top hunting ground for Japanese companies in Europe, accounting for 26% of the volume of outbound acquisitions from Japan into Europe in 2018, followed by Germany and France.

The Takeda acquisition was the only public M&A transaction by a Japanese company in the UK market in 2018. The previous year saw two – one being the acquisition by CTI of Waterman in the engineering consultancy sector, Gideon Franklin acting as advisor to CTI.

In 2018 there were in total 42 public offers announced in the UK market, three of which were hostile. A high profile one was the £8bn acquisition by Melrose of the engineering conglomerate GKN.

Activism has become a growing element in M&A in Japan. Elliott Management bought a stake in Hitachi Kokusai before the disposal and in Ansaldo STS at the time of the purchase by Hitachi. Private equity funds in general have become an increasingly important part of the landscape in recent years in Japan. Bain acquired the Toshiba memory chip business for $17.7bn and the advertising agency Asatsu-DK for $1.2bn. KKR acquired the Nissan subsidiary Calsonic Kansei for $4.3bn.

What then are the big themes for M&A in Japan emerging such recent record trends?

1.  Use of shares. Be it as a currency for acquisitions or for remuneration, Japanese companies are discovering a taste for using their shares in cross-border acquisitions, overcoming traditional regulatory hurdles.

2.  IFRS. Japanese accounting for goodwill has acted as a disincentive to management in making large acquisitions, but as IFRS (International Financial Reporting Standards) is more widely adopted this will widen the scope for acquisitions in the future.

3.  Governance. High profile corporate governance problems such as at Toshiba and Nissan have heightened the need for governance best practices, which in the short-term has made many companies more risk averse.

4.  Activism. There will be more consciousness about the use of cash and the future of underperforming assets with activists and private equity funds of all sorts playing a role in unlocking value for shareholders.

5.  Integration. With cross-border accounting for such a high part of M&A there will be increasing focus on integration, as there is a lack of management with appropriate experience or skills. 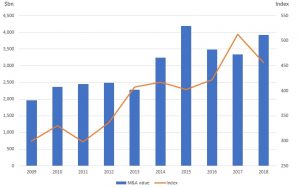