What makes Israel such a special source of technology for Japanese companies? Shintaro Hirato, a close associate of our company, provides the answer in this translated excerpt from his recent book Next Silicon Valley, published by Nikkei Business Publications.

Next Silicon Valley: road to the birth of the next technology revolution

Silicon Valley has the image in the business world as being the source of innovation. However, doubts are undeniably emerging as to whether it will remain such a powerful force in innovation. In various places around the world there is gathering momentum for the “next Silicon Valley” as entrepreneurs emerge with new ideas giving birth to advanced technologies.

This book introduces Israel in the Middle East, India in Asia and Germany in Europe through the eyes of three people with a deep local understanding (Israel – Hirato Shintaro, India – Naho Shigeta, Germany – Keiichiro Yano).

Israel making rapid progress as a giant of innovation

Israel is very remote from Japan and, compared with countries in Europe, America or South East Asia, Israel has no particular significance for most Japanese people. However, Israel ranks globally as a giant of innovation with over 300 leading companies electing it as an R&D base. In particular Tel Aviv, the second city, is well known as home to many start-ups. The culture is very different to Silicon Valley on the American west coast. Many of the products and services that we use in our daily lives originate from Israel. USB memory and IP telephony, for instance, are based on Israeli technologies.

It was Israeli industry which pioneered the use of “fire walls”. Nowadays companies from throughout the world are courting the latest technology emerging from Israel. Large US information technology companies including GAFA (Google Apple Facebook Amazon) are entering the market there.

Extraordinary sense of speed is a competitive weapon

A remarkable feature of Israeli start-ups is their speed. Israelis create small companies by independent funding or with venture capital or government funding, then at the basic technology stage conduct PoC (Proof of Concept) with large companies, and if that is successful, go on to raise funds to enter the US market. The background to this speed is the particular Jewish view of life and death. For a long time Jewish people did not have a country of their own. After the dream was fulfilled in 1948 there have been many wars with the surrounding countries. “We have always lived with a mind that we may die tomorrow” – this is the kind of belief which leads them not to fear failure and to develop unknown markets without any fear of conflict with the state or public authority.

Fearless of mistakes – a special attitude to starting up a company

In Israeli culture there is nothing unnatural about starting companies over and over again. On the contrary, someone who only founded one company would lack credibility. For that reason, if the first company someone founds does not succeed it would not adversely impact their chance of starting up a new one. If the idea and the technology are good, the company will be able to gain funding.

Another feature of Israeli serial entrepreneurs is that even if their business domain change for their next start-up, they start with the same core members. Part of this is that Israelis have a close-knit community and in Israel trust rules above all else. Israelis highly value factors such as someone’s track record (possibly including military service), who they know and their reputation. Once trust has been gained it will last a long time. The fact that companies are created by a core team of people who have known and trusted each other for a long time is one reason for Israeli start-ups being so swift to develop.

Tel Aviv rather than Silicon Valley

Hitherto Israel has felt very distant from Japan in comparison with other countries in Europe, America or Asia, but it is fast becoming a lot closer. Over the last four years over 80 Japanese companies have entered the Israeli market or invested there, the sum invested having grown 120 times to ¥130bn in 2017. In 2018 the number of Japanese visitors to Israel reached around 20,000, representing a 65% increase on 2016. There is a growing expectation that 2020 will see an even stronger relationship between the two countries in both business and tourism.

Japanese industry seems to have started to turn its attention to Israel around 2016. The reason is that large Japanese corporations started to look at open innovation to stimulate their development, introducing technology and ideas from other companies, universities or regional municipalities. Japanese industry had a sense of crisis as it sensed the threat of the rising force of open innovation coming from America’s Silicon Valley, the Holy Grail for start-ups. However, it is no easy matter building relationships with first class start-ups and much of Japanese industry undeniably left it late. After failing in their attempts to invest in Silicon Valley Japanese companies started to look elsewhere in places such as Israel.

Japanese companies can appear attractive for Israeli start-ups as offering a window to Asia. For a variety of reasons Japanese companies can be optimal partners to provide what Israeli companies might lack. Israel has a population of just 8.5 million people, so not many start-ups can thrive just on the back of the domestic economy. With a population of 126 million people Japan is seen as an attractive market, as well as being prized as a window to Asia. By teaming up with large companies in the Japanese automotive and electronics industries Israeli companies gain a better chance to expand their business activities not just in Asia, but in markets globally.

However, Israeli start-ups can have as a weakness their extreme sense of speed. Whilst this can also be a competitive advantage, it is often the case that they are too casual. Israeli start-ups consider the top priority to be to sell into world markets even when there is insufficient quality control. On a daily basis there can be imperfections, breakages or server downtime. Israeli start-ups are often not good at allocating enough time to ensure improvement of the quality of a particular service or product. On the other hand, Japanese companies will tend to carry out tests skilfully time and time again to improve product quality and maintain manufacturing skills. Japanese companies are also renowned for their follow-up care, with customer support a way of raising the level of satisfaction. Israeli industry is quite conscious of the role Japanese counterparts could have to counteract certain weaknesses.

Extract from Next Silicon Valley. Unauthorised copying or reproduction prohibited. 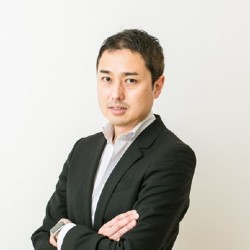 Shintaro is the Founder and CEO of Jakore, Inc. which acts as a bridge between Israeli high-tech companies and companies in Japan and Asia.

He took the lead in M&A, joint venture expansion, PMI for e-commerce and the digital contents business as General Manager of Global Expansion in Rakuten in all regions. Until recently he was General Counsel and management member for Viber, which Rakuten acquired for $900M, spending the majority of his time in Israel, Japan and other parts of the world. He also acted as Managing Director for Viber’s CVC fund, leading seed investment and portfolio management, as well as establishing and managing the Viber Japan team. He also acted as Chief Compliance Officer for Rakuten’s Digital Contents Company.

Prior to Rakuten Shintaro worked at major global companies and a law firm in the USA and Japan, including GE Capital, NTT and Sidley Austin. He earned BA Law from Keio University and LL.M from University of Chicago Law School, and is a licensed attorney for the State of New York. 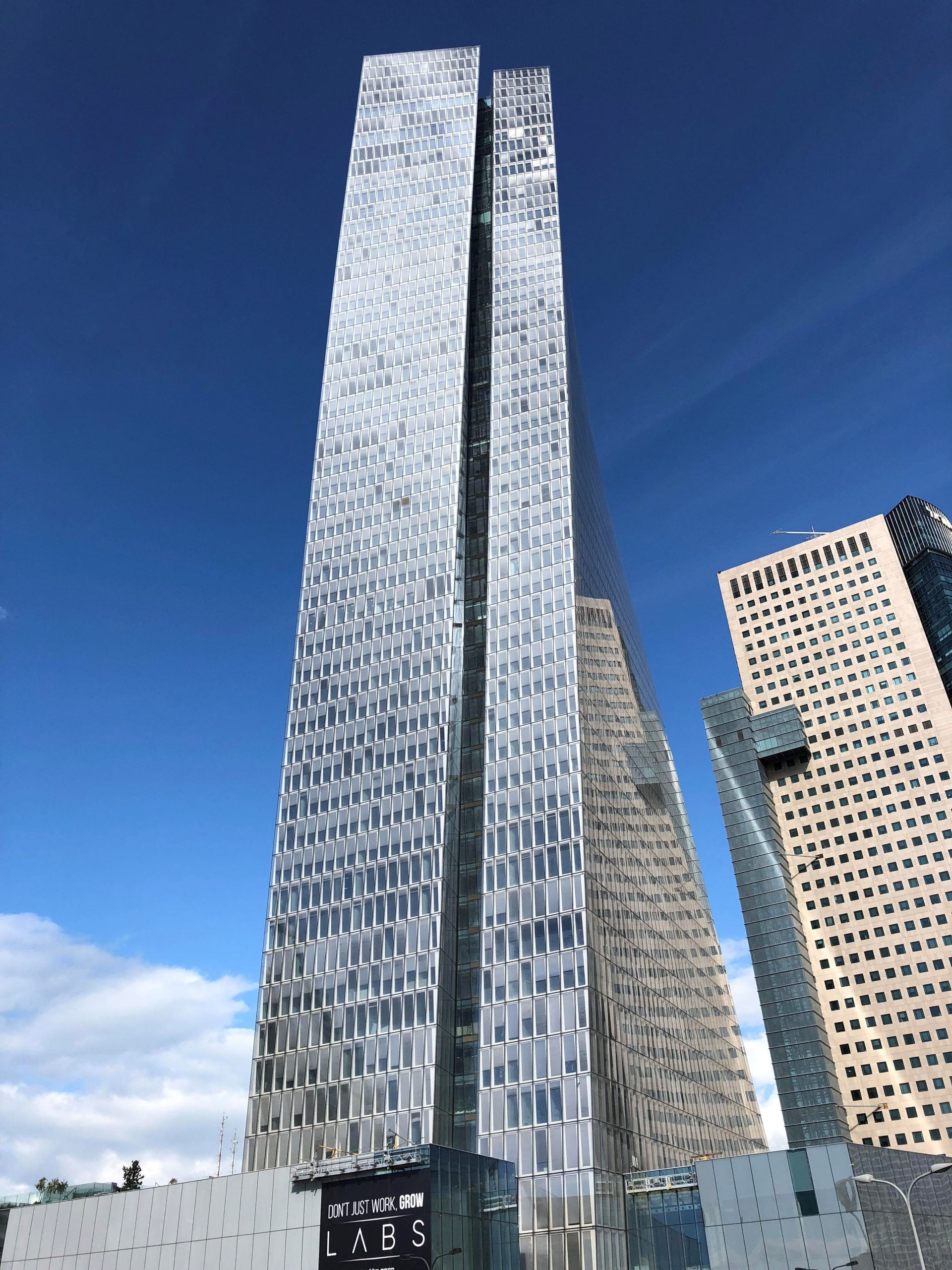 The Azrieli Sarona Tower in Tel Aviv, where many start-ups are located 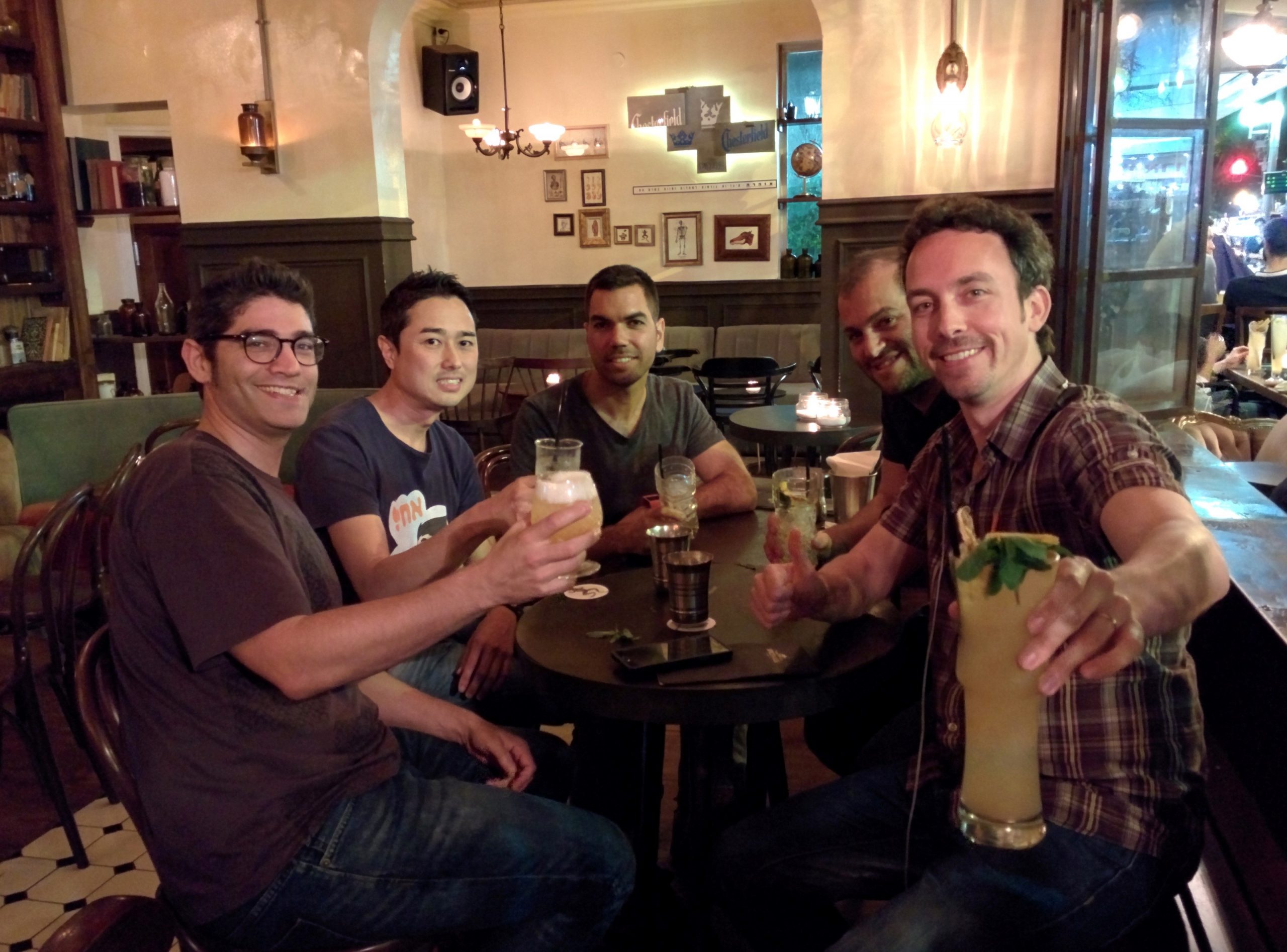 The author (second from left) in a bar with entrepreneurs