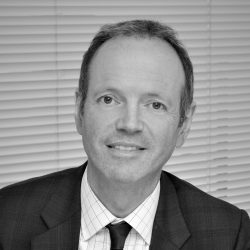 Gideon is a widely respected M&A expert and industrial equity analyst. He is fluent in Japanese, having studied the language at Cambridge and Keio Universities and having lived in Japan for several years. He is also fluent in German and French.

Whilst at Mizuho International in London, he set up an M&A team that was subsequently awarded “Asian M&A House of the Year” by Acquisitions Monthly. In June 2013 he received the Mizuho “Outstanding Award for Business Promotion”.

Previously he was a Managing Director at Morgan Stanley, responsible for industrials equity research, and was ranked top in all analyst surveys. Prior to that he worked with UBS, where he helped establish a Tokyo branch, later becoming Head of Research in Frankfurt and member of the German board.