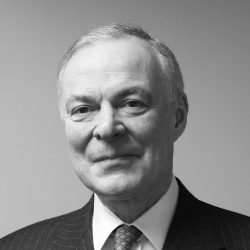 Lord Trenchard spent 11 years in Tokyo with Kleinwort Benson, when he ran their office, subsequently working with Robert Fleming, Prudential Financial and Mizuho Securities. Hugh was Director-General of the European Fund and Asset Management Association. He is consultant to Japan Bank for International Cooperation (JBIC) and a non-executive director of several investment companies.

Hugh is a member of the House of Lords. He is Vice Chairman of the British-Japanese Parliamentary Group, having served also as joint Chairman of the Japan Society. Since 2018 he is also Senior Adviser to Her Majesty’s Government on Japanese Financial Services. He was awarded the Order of the Rising Sun, Gold and Silver Star, by HM The Emperor of Japan in 2014.