12 themes for 2020 highlighted by editor Daniel Franklin in his introduction to The World in 2020, a publication of The Economist.

Daniel Franklin is the author of ‘Megatech: Technology in 2050’ presented at the British Embassy in Tokyo at a seminar and reception co-hosted by Gideon Franklin Ltd.

Twenty-twenty has a landmark ring to it. The start of a new decade prompts bigger-than-usual thoughts about the future. For the first time in 60 years the new decade coincides with a year of the rat, the start of the 12-year cycle in the ­Chinese zodiac. And, as the predictions in this volume describe, 2020 itself will not be short of drama. A dozen highlights give a sense of what lies ahead.

1. It’s judgment time. That is doubly true for President Donald Trump: first in Congress with the Democrats’ drive to remove him from office (the Republican-controlled Senate will save him), then in a febrile election in November. It will be ugly; the artificial intelligence we consulted reckons Mr Trump will lose. Britain’s reckoning with Brexit will leave the country divided, damaged and diminished.

2. Economies wrestle with negativity. Banks, especially in Europe, will battle with negative interest rates. America will flirt with recession—but don’t be surprised if disaster fails to strike, and markets revive.

3. China highlights positivity. It will claim to have met its target of achieving “moderate prosperity” by 2020. Other countries will have to work out how to position themselves, in trade and technology, between a Chinese sphere of influence and an American one.

4. Sport has a jumbo year. The Tokyo Olympics will draw a huge global audience. The Euro 2020 football championship will be spread across 12 countries. Cricket hopes for a smashing success in Australia with the t20 World Cup—and in England and Wales with a new, even shorter format called The Hundred.

5. Worries about nukes proliferate. The five-yearly review of the Nuclear Non-Proliferation Treaty will be a fraught affair, 75 years after the bombing of Hiro­shima and Nagasaki. Fears of a new arms race will grow as nuclear arms-control agreements fray.

6. Sustainability is all the rage. At least, talking about it is. In Kunming countries will discuss bio­diversity. In Glasgow they will make pledges on carbon emissions. Business leaders will vow to support sustainable capitalism—as long as shareholders let them.

7. The Gulf welcomes the world. Dubai hopes its World Expo will have a lasting impact. More awkwardly, Saudi Arabia hosts the g20 summit.

9. Tech has both highs and lows. The highs include flying taxis, electric supercars and personalised medicine; the lows involve tech giants bracing themselves for more regulation, taxation and critical scrutiny. Instagram will find itself in the spotlight of controversy in this American-election cycle.

10. Big anniversaries resonate, especially Beethoven’s 250th. It’s also 500 years since Raphael’s death, 400 since the Mayflower sailed to America, 300 since the South Sea Bubble burst, 200 since the birth of Florence Nightingale (the World Health Organisation has designated 2020 the Year of the Nurse), 100 since Prohibition, 75 since the founding of the un and—while their fans gently weep—50 years since the Beatles broke up.

12. It’s the decade of…the “yold”, or the young old, as sprightly baby-boomers hit 65. For the first time, the world will have more people aged over 30 than under. The 2020s promise to be a bad decade for African dynasties, a disruptive one for countries facing separatist pressures and an exciting one for plant geneticists, who in ten years’ time aim to be drawing down carbon dioxide from the atmosphere at a global scale.

The new decade provides an excuse to look beyond the coming year. A special section, “2020 visions”, ­reviews long-range predictions from the past and for the future, speculates on what the world is doing today that will appal our grandchildren, and includes ideas on tech’s evolution from the founders of DeepMind and Huawei. Elsewhere, guest contributors invite us to think afresh about the future of everything from Africa to Venezuela to the American Dream.

One thing about 2020 is sure: this annual will have a new editor. After 17 years, it is time to pass on the crystal ball. Under Tom Standage, a master at spotting trends and putting them in context, the future will be great.

From The World in 2020 ©2019 The Economist Newspaper Limited, London. All rights reserved. 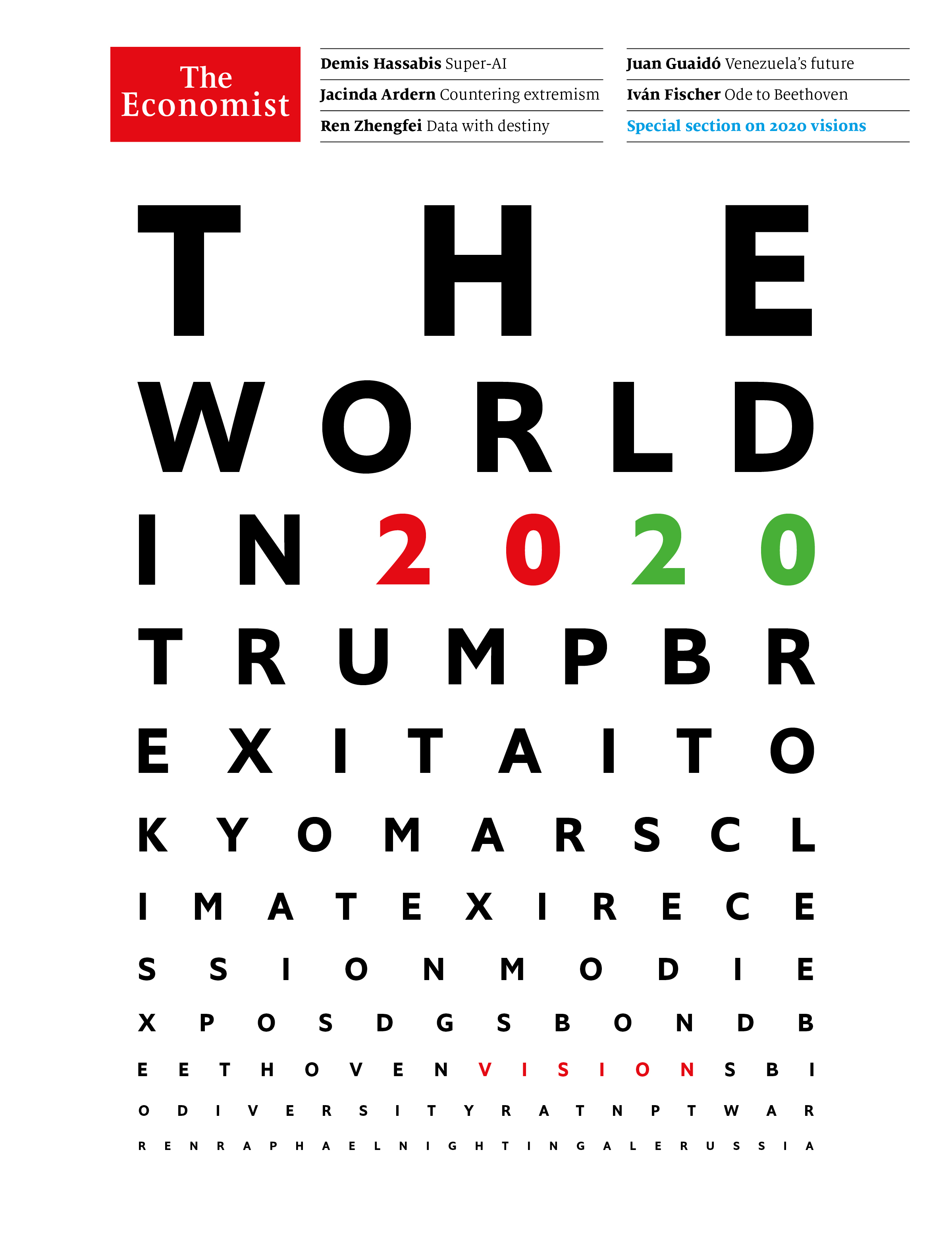