10 themes for 2021 highlighted by editor Tim Standage in his introduction to The World in 2021, a publication by The Economist.

This is followed by the leader by former editor Daniel Franklin on the need for America to invest more in diplomacy. Daniel Franklin is the author of ‘Megatech: Technology in 2050’ presented at the British Embassy in Tokyo at a seminar and reception co-hosted by Gideon Franklin Ltd.

Do you feel lucky? The number 21 is connected with luck, risk, taking chances and rolling the dice. It’s the number of spots on a standard die, and the number of shillings in a guinea, the currency of wagers and horse-racing. It’s the minimum age at which you can enter a casino in America, and the name of a family of card games, including blackjack, that are popular with gamblers.

All of which seems strangely appropriate for a year of unusual uncertainty. The great prize on offer is the chance of bringing the coronavirus pandemic under control. But in the meantime risks abound, to health, economic vitality and social stability. As 2021 approaches, here are ten trends to watch in the year ahead.

1.  Fights over vaccines. As the first vaccines become available in quantity, the focus will shift from the heroic effort of developing them to the equally daunting task of distributing them. Vaccine diplomacy will accompany fights within and between countries over who should get them and when. A wild card: how many people will refuse a vaccine when offered?

2.  A mixed economic recovery. As economies bounce back from the pandemic the recovery will be patchy, as local outbreaks and clampdowns come and go—and governments pivot from keeping companies on life-support to helping workers who have lost their jobs. The gap between strong and weak firms will widen.

3.  Patching up the new world disorder. How much will Joe Biden, newly installed in the White House, be able to patch up a crumbling rules-based international order? The Paris climate treaty and the Iran nuclear deal are obvious places to start. But the crumbling predates Donald Trump, and will outlast his presidency.

4.  More US-China tensions. Don’t expect Mr Biden to call off the trade war with China. Instead, he will want to mend relationships with allies to wage it more effectively. Many countries from Africa to South-East Asia are doing their best to avoiding picking sides as the tension rises.

5.  Companies on the front line. Another front for the US-China conflict is companies, and not just the obvious examples of Huawei and TikTok, as business becomes even more of a geopolitical battlefield. As well as pressure from above, bosses also face pressure from below, as employees and customers demand that they take stands on climate change and social justice, where politicians have done too little.

6.  After the tech-celeration. In 2020 the pandemic accelerated the adoption of many technological behaviours, from video-conferencing and online shopping to remote working and distance learning. In 2021 the extent to which these changes will stick, or snap back, will become clearer.

7.  A less footloose world. Tourism will shrink and change shape, with more emphasis on domestic travel. Airlines, hotel chains and aircraft manufacturers will struggle, as will universities that rely heavily on foreign students. Cultural exchange will suffer, too.

8.  An opportunity on climate change. One silver lining amid the crisis is the chance to take action on climate change, as governments invest in green recovery plans to create jobs and cut emissions. How ambitious will countries’ reduction pledges be at the un climate conference, delayed from 2020?

9.  The year of déjà vu. That is just one example of how the coming year may feel, in many respects, like a second take on 2020, as events including the Olympics, the Dubai Expo and many other political, sporting and commercial gatherings do their best to open a year later than planned. Not all will succeed.

10.  A wake-up call for other risks. Academics and analysts, many of whom have warned of the danger of a pandemic for years, will try to exploit a narrow window of opportunity to get policymakers to take other neglected risks, such as antibiotic resistance and nuclear terrorism, more seriously. Wish them luck.

The coming year promises to be particularly unpredictable, given the interactions between the pandemic, an uneven economic recovery and fractious geopolitics. This annual will, we hope, help you improve your odds as you navigate the risks and opportunities ahead.

And it’s not all doom and gloom. Our special section, “Aftershocks”, considers some of the lessons, and chances for positive change, that have emerged from the crisis. So let the dice fly high—and, whatever cards 2021 may end up dealing you, may the odds be ever in your favour.

Tom Standage
Editor, The World in 2021

Who will run the world in 2021? International institutions such as the United Nations have been weakened by great-power rivalry. Russia will be a spoiler, not a leader. In Europe, Boris Johnson will have his hands full with the aftermath of Brexit, Germany’s Angela Merkel will leave the stage and France’s Emmanuel Macron has limited means to pursue his grand ideas. China is the rising superpower, and an increasingly assertive one, but not yet keen, let alone able, to take on the burdens of world leadership. The question is whether America, under President Joe Biden, will be prepared to step back into the role.

For some years now America, weary of its “endless wars”, has been in retreat. Barack Obama believed it was time to focus on “nation-building at home”. Donald Trump took to withdrawal with gusto, pulling the country out of a long list of international arrangements, including the Paris climate agreement, the Iran nuclear deal and—in the middle of a pandemic—the World Health Organisation. As America has stepped back, emboldened authoritarian leaders have stepped forward, posing a challenge to democracies everywhere.

Look ahead, however, and further withdrawal is scarcely an attractive option. Global threats will multiply, from pandemics to climate change to space weaponry. And in an increasingly multipolar world, America cannot count on simply getting its way. It will need to rely on the patient pursuit of its interests through persuasion, building coalitions and working with allies. In short, it will have to rely on diplomacy.

This is by no means a dismal prospect. America retains great advantages even in the more competitive geopolitical era ahead. It is still by far the mightiest military power and the world’s biggest economy. In contrast to rivals such as China and Russia, it has steady allies who can help amplify its influence. And at its best it is a champion of human rights and freedoms that can inspire people everywhere.

Americans are right to want to limit the flexing of their military muscle. The strength of America’s armed forces will always be a vital part of its ability to exert influence. Yet since the terrorist attacks of September 11th 2001 the superpower’s foreign policy has relied too much on force. It is time to put diplomacy first.

But just as the demand for sustained, sophisticated American diplomacy is rising, the capacity of the country’s foreign service to supply it is dwindling. The State Department is demoralised and suffering from a hollowing-out of talent. That will be hard to remedy soon.

The troubles of the country’s oldest federal agency did not begin with the Trump administration but they deepened dramatically under it. Mr Trump openly referred to “the Deep State Department”, repeatedly (if unsuccessfully) proposed slashing its budget and publicly attacked experienced diplomats, such as those involved with policy towards Ukraine, whose only crime was to do their job. Career diplomats were virtually shut out of senior policymaking roles, and the share of political appointees to ambassadorial roles—their main qualification often being the size of their political donations—reached new heights. American diplomacy is in crisis.

What can be done? Three times in the past century—after the first world war, after the second world war and during the cold war—Congress passed legislation to shape a foreign service fit for the future. Yet in recent decades Congress has focused on the shape of America’s armed services and on the organisation of the country’s homeland security, not on diplomacy. Whether lawmakers are capable of agreeing on a new framework for the State Department is open to doubt. With or without a new act, however, America must rethink its diplomacy for a more contested global landscape.

America, rediscover your Excellency
Plenty of people are starting to do just that, including a group, led by former ambassadors at Harvard’s Kennedy School, who have prepared a road map. Some of their suggestions involve changes to the way the State Department bureaucracy works. It is notoriously inflexible and risk-averse. It badly needs to modernise its career structure, including opening up to entry at all levels, not least to help it improve its dismal record on diversity: among America’s ambassadors abroad, only three are African-American and four Hispanic. But the big idea is simple and urgent. A great power has let its foreign service slip, to a dangerous degree. For the sake of its own future, and for the good of the world, in 2021 America needs to start reinvesting in diplomacy.

From The World in 2021 ©2010 The Economist Newspaper Limited, London. All rights reserved. 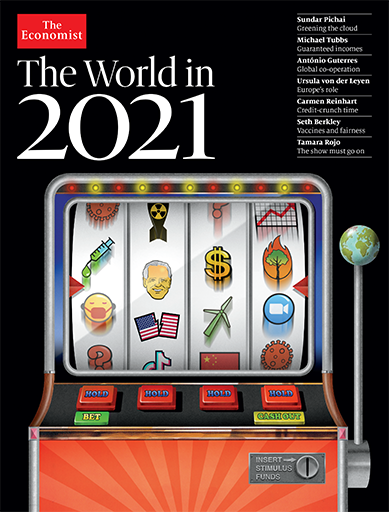